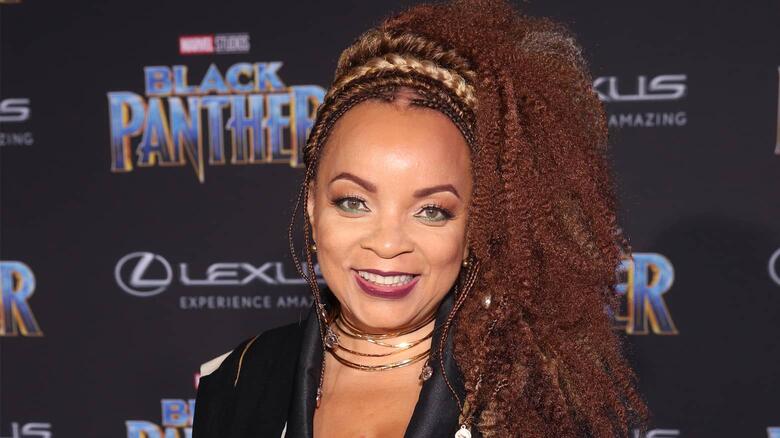 During the virtual ceremony, the costume designer received the 2,694th star in recognition of her more than three decade career in the industry. The ceremony acknowledged Carter’s ability to “wow audiences and dazzle critics alike with costumes inspired by traditional African tribal wear merged with a contemporary look, delivering fashion and function, incorporating technology, and creating such authenticity ownership and empowerment for the characters and viewers cementing her as one of the preeminent voices and experts on Afrofuturism.”

“What a pleasure it is to be celebrating today Ms. Ruth E. Carter on her historic Hollywood Walk of Fame induction,” exclaimed guest Oprah Winfrey. “I personally had the opportunity to work with Ruth on Lee Daniels’ The Butler and I could tell instantly that her passion for clothes, costumes and design were matched by her intention in creating a nuanced portrayal of a Black family through the decades. What I first observed on The Butler and then again on Selma was a woman who was deeply intentional about creating clothing to represent the culture and journey of African Americans because both of those stories involved African Americans. And now we all know her esteemed credit list, both fictional and historical, and what strikes me most is the ease in which she works to create an entire mood through her impeccable design choices, and what this does is allow any actress who is working with Ruth to really surrender.”

“Thank you for seeing the depth of culture, history, artistry, and welcoming my vision of Afrofuture into the lexicon of American filmmaking,” proclaimed honoree Ruth E. Carter. “Most of all, I dedicate this star to all the young and aspiring filmmakers. I drove to Hollywood 36 years ago…nothing was handed to me. Every moment, every sacrifice, every effort was hard work inspired by my passion. It’s my hope that anyone who sacrifices, who beats these streets of Hollywood, carrying their dreams in heavy garment bags full of costumes, desiring to be the best, like I did, that when you gaze upon my star feel my energy, feel the power of your own unique story to realize your dreams so you too can reach your star. Wakanda Forever.”

#Roommates, not even a global pandemic can stop Anthony Anderson from receiving one of the biggest honors in the entertainment industry—an official star on the Hollywood Walk of Fame. Despite the ongoing rise of COVID-19 in the U.S., Anthony Anderson’s Hollywood Walk of Fame honor is moving forward in a very different way than he originally planned and he will be the first celebrity to do so.

Anthony initially hoped that he would celebrate with his family and closest friends in the usual high-profile public ceremony that generally accompanies the honor. However, in his words, “unfortunately that type of event can’t happen because of what’s happening in the world right now.”

He has a good attitude about the uncontrollable situation though, saying:

“When the world does open up and when my star is on that Walk of Fame, we will have a party on that star! I will go get a permit to shut down that part of the street, just so we can have our pomp and circumstance, so the fans and the public can enjoy it just as much as me and my family will enjoy it the day that it happens.”

Meanwhile, the Emmy and Golden Globe nominee is gearing up for the next season of his ABC hit sitcom “Black-ish.”

The post Anthony Anderson To Receive Star On The Hollywood Walk Of Fame Despite COVID-19 Pandemic appeared first on The Shade Room.

He has more credits than nearly anyone in Hollywood, yet he still isn’t a bona fide “star.”

In his legendary career, actor James Hong — who recently went viral as “Hollywood’s most prolific actor” — has accrued more than 600 acting credits and inspired countless careers, yet he still doesn’t have a star on the Hollywood Walk of Fame.

Now, a growing group of fans is actively trying to change that for Hong, 91, whose diverse projects include “Seinfeld,” “Big Trouble in Little China” and “Blade Runner.”

“I’ve said it before and I’ll say it again: James Hong deserves a Star on the #Hollywood Walk of Fame. I’ve already started the nomination process. Who’s with me? #StarForJamesHong,” wrote “Hawaii Five-0” and “Lost” star Daniel Dae Kim in a now viral tweet earlier this month.

Other actors including Harry Shum Jr., of “Crazy Rich Asians,” and comedian Ken Jeong have also voiced their support for Hong getting a star, CNN reported.

Roughly 30 people are selected annually to be added to the Walk of Fame, where the creation and installation of a star costs $50,000. Kim, 52, has already raised more than enough via a GoFundMe.

“This man epitomizes the term ‘working actor,’ and that’s not even taking into account all he’s done to help further representation for actors of color,” reads the fund-raiser’s description of Hong. “Let’s show this man the respect and love his career has merited by getting him a Star on the Hollywood Walk of Fame!”

Hong himself believes his name’s absence from the Walk of Fame is more than just an oversight by the industry. In an interview with the Great Big Story podcast, he referred to it as evidence of Hollywood’s continued prejudices.

“Even to this day, 500 credits or so, I don’t have a star on the Walk of Fame. So in a sense there is a lot of hidden prejudice behind this industry. They don’t think of us, like I say, the principal person,” he told the outlet. “And I try to fight against that.”

A street performer, dressed as Spider-Man, walks along Hollywood’s Walk of Fame near TCL Chinese Theatre.

Jack Nicholson and James Hong in “The Two Jakes”

Get celebrity news, entertainment articles and some of the internets funniest videos, right to your inbox. Check back here to follow this amazing launch, and its FREE!