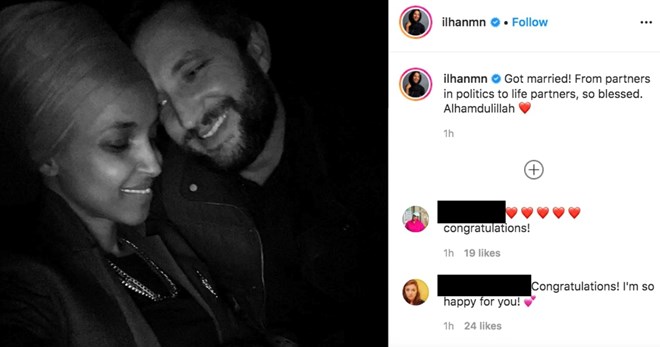 Ilhan Omar announced Wednesday on Instagram that she and Tim Mynett have married.

Minnesota U.S. Rep. Ilhan Omar announced Wednesday that she has married Tim Mynett, a political consultant she has worked with and been romantically linked to.

Omar announced their marriage in an Instagram post that did not name Mynett. The Minneapolis Democrat finalized her divorce from husband Ahmed Hirsi in November, several months after Mynett’s wife, a Washington, D.C., physician, alleged in court filings that he left her after becoming romantically involved with Omar. Mynett and his wife have also since finalized their divorce.

“Got married! From partners in politics to life partners, so blessed,” Omar’s Instagram post said. A spokesman for Omar said the two also married in the Islamic faith.

Allegations of a relationship between Omar and Mynett swirled last year and brought much scrutiny on the freshman congresswoman. Her relationship with Mynett is at the center of a Federal Election Commission complaint alleging that money Omar’s campaign committee paid to Mynett and his firm for travel expenses were for personal use.

Omar’s marital history also came under political fire last year after it came to light that she and Hirsi filed taxes jointly while she was legally married to another man, Ahmed Nur Said Elmi. She married Elmi during what she described as an impasse in her relationship with Hirsi. The marriage with Elmi legally ended in 2017, several years after she reunited and had a third child with Hirsi.

Omar corrected the tax violation but never explained it.

Rep. Ilhan Omar appears to be more comfortable being seen in public with alleged lover and chief fundraiser Tim Mynett — now that the two are both divorced.

Omar, who denied the affair despite filing for divorce shortly after The Post reported on the dalliance, was seen out with Mynett last week, according to photos obtained by the Daily Mail.

The pair, who each finalized their respective divorces late last year, could be seen exiting DC-based Mediterranean restaurant Café 8 in photos that the outlet dated as being taken last Thursday.

In August, The Post was first to report that Mynett’s then-wife had alleged in court papers that he had walked out on their marriage after admitting to having an affair with the Somali-born US representative and declaring his love for Omar.

Dr. Beth Mynett said that her cheating spouse, Tim Mynett, told her in April that he was having an affair with the the Minnesota congresswoman, even making “shocking declaration of love” for Omar before ditching his wife and children.

Ahmed Hirsi made the shocking discovery last spring, during a…

“The parties physically separated on or about April 7, 2019, when Defendant told Plaintiff that he was romantically involved with and in love with another woman, Ilhan Omar,” court papers filed by the jilted wife read.

Omar and her then-husband, Ahmed Hirsi, filed for divorce less than two months after the affair allegations came to light.

According to court papers, he will be paid as much as $250,000 over six years to not discuss the affair or details of his former marriage publicly.