Social media users have been left stunned after photographs emerged of Kylie Jenner without makeup.

The 22 year old was snapped going to visit a friend during coronavirus lockdown on Monday.

Jenner, who is known for her full lips, extended lashes and flawless beauty looks, appeared relaxed and bare-faced.

The young billionaire was snapped wearing a tracksuit, her feet bare and her hair tied in a bun.

The mum of one was also seen clutching a packet of chips as she made her way into a gold car.

Fans were left stunned at what the fashionista looked like without makeup.

“Makeup consists of polyjuice potion…there’s no way both of these are Kylie Jenner…,” one person said.

“This is probably the only picture of kylie Jenner that i find it relatable,” another person said.

“Wow that’s Kylie Jenner with no makeup I have to say she looks cute,” another said.

Others slammed Jenner for appearing to ignore her own advice to stay home during the COVID-19 lockdown.

In a message to fans on Instagram, Jenner urged people to stay home and take social distancing seriously.

“The faster we stay inside the faster we can get back to it. I hope everyone is taking social distancing serious!!” she said on March 24.

Home Entertainment News ”Stop dressing like a p*rn star, you are old, go and get…

”Stop dressing like a p*rn star, you are old, go and get married” – Trolls blast Oge Okoye

Nollywood Actress, Oge Okoye was on the receiving end of some scathing criticism from instagram trolls after she shared a photo of herself.

Oge had shared the above photo with the caption ;

Good people are like street lights along the roads…..They don’t make the distance short but they light up the path and make the walk EASY & SAFE…..Good morning glammies? 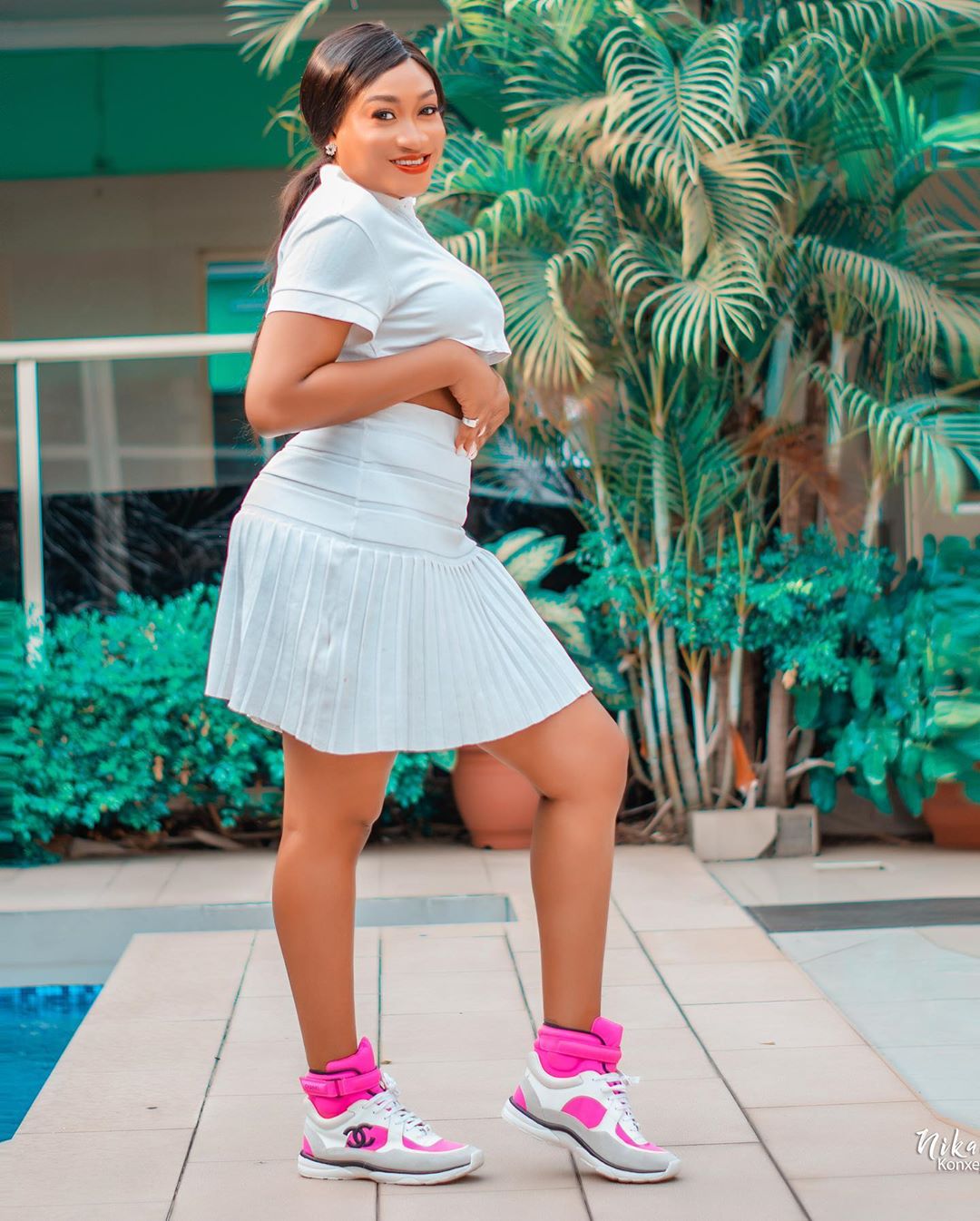 However, the trolls were not interested in the meaning behind her caption and they took to the comment section to blast her ‘suggestive dressing’.

“Both mother and baby are happy and healthy,” reps for the couple told People Magazine.

“A fantastic voyage that begins in wonder and transformation,” she wrote on her IG page. “I will never forget how this felt and now won’t soon forget how it looked.”

The couple first revealed the big pregnancy news when they stepped out together in Los Angeles back in January when Jodie flaunted her baby bump in a form-fitting dress.

Two months later, on International Women’s Day, Jodie announced that they were expecting a daughter.

“Favourite moments with baby,” she captioned an Instagram video that showed her stomach moving as her daughter kicked around inside. “Can you see her dancing in there? Every time I try to record she stops.”

Joshua said he always had a hunch their child would be a girl. “My family doesn’t really have boys, so I knew,” he said during a March interview with Access, saying his extended family was “85 to 90 percent female.”

There was obvious concern about Jodie’s safety in regard to the coronavirus as her due date approached.

“Obviously, it’s a bit stressful right now and we’re just trying to figure out how to be smart about being quarantined,” Joshua said during a video interview with “Good Morning America.” “The medical system right now is a little bit difficult, so we’re figuring it out day by day.”

“But she’s healthy and the baby’s healthy, so that’s important,” he added.

We reported back in December that the couple tied the knot just a few months after going public with their relationship on the red carpet.

They were rumored to have been dating since at least November 2018.

Soap fave Michelle Hardwick, who plays Vanessa Woodfield in Emmerdale, has announced she is expecting her first child.

The 44-year-old actress shared a cute photo on Instagram of her clutching her stomach aside her Emmerdale producer wife Kate Brooks, who is holding their pet dog Fred.

Last October, Michelle shared a picture of the couple’s wedding celebrations in September with their followers.

Friends and co-stars left cutes messages on the picture post.

The couple married in September 2019 at Elvis Presley’s Graceland estate in Memphis, Tennessee, without any family or friends.

Michelle posted the news to Instagram at the time and wrote: “In over 100 degrees heat, on Tuesday 10th September, I became Mrs Brooks.”

Michelle and Kate got engaged at the end of 2018 after Michelle popped the question.

This is Michelle’s second marriage after she split from ex-wife Rosie Nicholls in 2017.

Michelle joined Emmerdale back in 2012 as vet Vanessa.

Currently her character is going through a tough time as she goes through chemotherapy.

Leave your congratulations for Michelle and Kate on our Facebook page @EntertainmentDailyFix! Do you want the good news or the bad news first? The good – or rather, exciting – news is that the Venom sequel has a new title. The bad news is that it’s been postponed until summer 2021.

Sadly, though, not even Hardy’s symbiote is immune to the changes currently sweeping Hollywood as the sequel has become the latest film to be pushed back. While the eight month delay isn’t exactly welcome news, Sony has provided a silver lining in the form of some new information about the film – namely the title.

The sequel has officially been dubbed Venom: Let There Be Carnage, suggesting the new film will be positively action-packed and full of chaos. Of course, fans of the first film will be aware that as well as implying chaos, ‘Carnage’ here refers to Venom’s supervillain, played by Harrelson.

Director Andy Serkis has previously hinted that there will be a lot to look forward to in his sequel, as he expressed his hopes to make it an ‘extraordinary piece of cinema’.

It’s a fantastic franchise and I’m honored to be asked to direct it.

Hopefully the new release date will give Serkis the time to develop his ‘extraordinary’ piece and make sure viewers get all the Carnage they expect, and more.

As more studios experiment with bringing high-quality pics into the home during the current COVID-19 home quarantine, Warner Bros. is jumping into the mix by fast-tracking their animated pic Scoob! onto PVOD and premium digital ownership on May 15 in the U.S. and Canada. The Tony Cervone-directed big feature animated take of the Hanna-Barbera famed cartoon TV series Scooby Doo was originally set to open on May 15 in theaters.

Scoob! will be available for a 48-hour rental PVOD period for U.S. $19.99 or EST price of $24.99. Warner Bros. has no future plans to have big pics like Wonder Woman 1984, Tenet, In the Heights skip theaters and head into homes. In the Heights was re-scheduled today for June 18, 2021. If there are any movie theaters open in mid-May, I understand Scoob! will not play in cinemas.

The other reasons why, we hear, Warners is also taking Scoob! into the home is largely because the film is finished. Recently, Universal’s decision to take Trolls World Tour into the homes over Easter weekend with a $19.99 48-hour PVOD rental yielded an estimated first weekend stateside revenue between $40M-$50M. Recently, Paramount unloaded MRC’s The Lovebirds to Netflix, with STX sending their family live-action feature My Spy to Amazon Prime. Disney announced that Artemis Fowl, originally scheduled to open in theaters over Memorial Day weekend, would go to Disney+ at some point in the future.

Warner Bros. Chair and CEO Ann Sarnoff made the announcement about Scoob! today. Earlier today, AT&T announced that WarnerMedia’s HBO Max will be offered free or via promotion to “tens of millions” of its U.S. wireless, video and internet customers on the streaming service’s launch date of May 27.

“While we’re all eager to be able to once again show our films in theaters, we’re navigating new, unprecedented times which call for creative thinking and adaptability in how we distribute our content,” said Sarnoff.  “We know fans are eager to see Scoob! and we’re delighted we can deliver this feel-good movie for families to enjoy while they’re home together.”

The new pic follows how lifelong friends Scooby and Shaggy first met and how they joined with young detectives Fred, Velma and Daphne to form the famous Mystery Inc. Now, with hundreds of cases solved and adventures shared, Scooby and the gang face their biggest, most challenging mystery ever: a plot to unleash the ghost dog Cerberus upon the world. As they race to stop this global “dogpocalypse,” the gang discovers that Scooby has a secret legacy and an epic destiny greater than anyone imagined.

Warner Bros. released two live-action versions of Scooby-Doo on the big screen during the early aughts, directed by Raja Gosnell and written by James Gunn, that accumulated close to a half billion at the global box office.

While live-action production is stalled, animation movies have had a bliss time during the COVID-19 climate as they continue to be in production. Most productions are use to work remotely in far-off-locations with Zoom calls coordinated by the pic’s director and producers with crew units. For Scoob! their animation vendor was headquartered in Dallas, TX with most of the work done at a studio in Montreal.

Cervone told Deadline that when the COVID-19 cases emerged last month, Scoob! was close to done, already in the mixing stage, with shots being finished and heading to DI. The editorial department at that point split up and took their equipment home to work. Color correction was also completed at home, and it was crucial that the crew all have the same standard monitor for uniform results. Ditto on speakers when it came to sound design and editing.

“We would make sure that everything was in sync, that we would have the same kind of quality speakers, that there was a big enough bandwidth that we could really get the sound quality up, and so from a design point of view, we were able to do that as well,” Cervone tells Deadline.

Any ADR for actors could easily be administered by an actor over an iPhone. On animated pics, it’s feasible for talent to record remotely, i.e. earlier in production, Issacs recorded in a London studio, which Cervone would oversee remotely from Montreal via Skype.

“This movie has consumed me for the last five years and I’m really happy with the results of all that effort and hard work. This team has really risen to the occasion and really done a great job,” said Cervone.