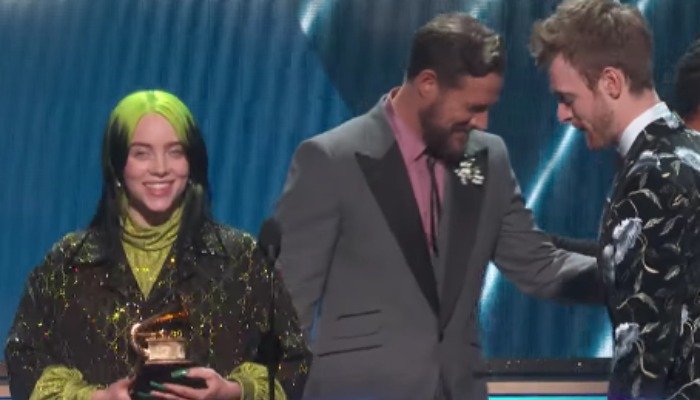 Billie Eilish couldn’t stop taking home Grammys, adding Best New Artist, Album of the Year and Record of the Year to her list of awards.

The 18-year-old was recognized for some of her chart-topping songs from her debut album, WHEN WE ALL FALL ASLEEP, WHERE DO WE GO?. She won five out of six awards she was nominated for, taking home wins in the four biggest categories.

Christopher Cross was the first person to ever win all four awards back in 1981. Now, Eilish is the second person and first female to win all four major Grammys categories in one night.

Norah Jones came close in 2003, sweeping the four categories and taking home three out of the four awards herself. Songwriter Jesse Harris snagged the fourth by winning Song of the Year for her work on Jones’ “Don’t Know Why.”

“I feel like the fans deserve everything, I feel like they have not been talked about enough tonight,” Eilish said. “I love all fandoms. Thank you to the fans, you make this worth it.”

You can see a clip of her speech below.

“I feel like they have not been talked about enough tonight, because they are the only reason that any of us are here at all.” @billieeilish thanks the fans and her fellow nominees while accepting the award for best new artist https://t.co/voDTa3oOBF #Grammys pic.twitter.com/aFDdELJS0e

Then, she and FINNEAS won Album of the Year, and she said she thought Ariana Grande “deserves this” more for her record thank u, next. Grande had the best reaction, which you can see below.

Billie Eilish says she thinks Ariana deserves the album of the year award and Ariana’s reaction is amazing #GRAMMYs pic.twitter.com/Zv320KmwKJ

FINNEAS talked about how they wrote an album about tough issues like depression and climate change that wasn’t supposed to win a Grammy that was met with major applause by the audience. Check out that below.

Billie Eilish is now the youngest artist ever to win Album of the Year at the #GRAMMYs, and her brother Finneas says “We didn’t make this album to win a Grammy. We didn’t think it would win anything” pic.twitter.com/LV5tmk91nr

After that, she won Record of the Year for “bad guy”. At that point, she and Finneas just said: “thank you”. You can see that below.

Billie Eilish won the #Grammys for “Record of the Year” with Bad Guy! Congrats @billieeilish

Additionally, Eilish won Song Of The Year alongside her brother Finneas for “bad guy”. You can see a clip of their speech below.

Billie Eilish and her brother Finneas react to winning Song of the Year at the #GRAMMYs, where Finneas won Producer of the Year earlier in the night pic.twitter.com/dRGK3ftUBD

Before their win, the pair brought the emotion during their debut Grammys performance of “when the party’s over” from Eilish’s chart-topping debut album WHEN WE ALL FALL ASLEEP, WHERE DO WE GO?.

FINNEAS played piano beautifully while Eilish belted out the track. They both wore matching glittery outfits that were pretty much everything. You can see a video of their performance below.

No, we can’t just let it go. @billieeilish, this performance is

Check out the full list of Grammy Awards winners here.

What do you think of Eilish’s big wins at her first-ever Grammy Awards? Sound off in the comments down below and let us know!

See more: 10 pop-punk shows we wish we could have gone to

The post Billie Eilish is first woman to win all four major Grammys in one night appeared first on Alternative Press.