This feature originally ran in 2015 for the film’s 25th anniversary, and has been amended to celebrate its 30th.

It’s like we just discovered this on basic cable yesterday, but seriously, Tremors is 30 years old today, and there’s still so much to say about it.

The fact that it stills rules as both a creature feature and a comically podunk, shakey-Jake Western. The argument for this as Kevin Bacon’s best starring vehicle, not that silly old Footloose. The promise of a distinct young director named Ron Underwood, who seemingly vanished after the ‘90s. The crazy fact that this spawned several direct-to-video sequels, with yet another one coming soon.

But most importantly, we’re here to reflect on the legacy of a ridiculously fun B-movie that features incredible monsters called (ugh), “graboids.” So get your feet off the ground, get cozy in your rumpus room, and join us for an anniversary discussion of Tremors.

Blake Goble (BG): I swear, I must have seen Tremors on USA like two dozen times over the years, in bits and in its full glory. It was always on and always slightly better than most options on TBS or TNT on Saturday mornings. And then, like around 1999, I managed to snag a Collector’s Edition DVD (big deal stuff getting those for me – bonus features and everything!), and I finally got to hear just what Burt (Michael C. Gross gnawing on every scene) says after he slays a graboid in his gun-crazy rumpus room with an elephant rifle.

I don’t mind it either way. Word choices couldn’t diminish the impact of an already hysterical scene. Everyone thinks Burt and his wife are screwed as the underground monsters are coming their way, and they blast their way to jubilation and safety thanks to the fact that they’re gun nuts. There’s this clever shot that director Ron Underwood stages where the camera pulls back to Burt’s comically enormous wall of rifles, shotguns, and various blasting devices. It’s all about this funny scene.

That’s how strong Tremors carried for me. It burrowed a little spot in the back of my head over the years, and it’s stayed with me. It’s a hard-to-define quality, but Tremors was and still is one of those movies that, if spotted on TV, can be re-entered at any point. Like Goodfellas or Shawshank. It’s fast and funny and really scary and totally unique, and it’s lasted as a genre jaunt. And yet, I still feel like I barely know this film after all these years.

How did you guys come to Tremors? 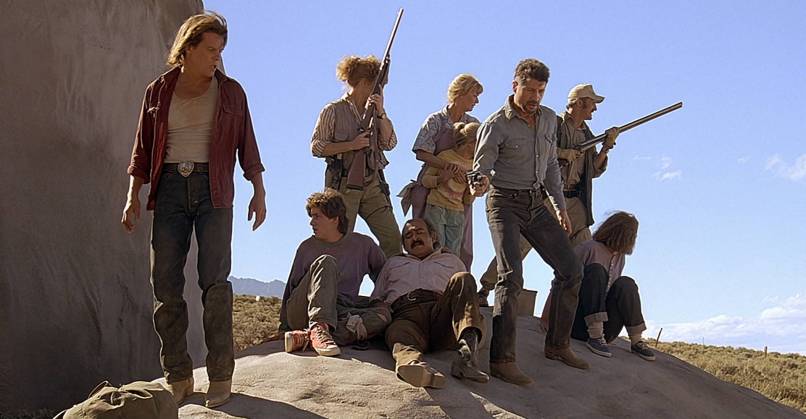 Michael Roffman (MR): For some reason, and this will date me, I have a vivid memory of my father picking me up at my best friend’s birthday party down the street. “Boys night,” he told me. “There’s a movie we can order on TV!” So, over pizza and soda, we watched Tremors together. The thing is, we watched so many films together growing up — starting with Beverly Hills Cop at the tender age of two and more recently leaving 2010’s True Gritdisappointed — but I still recall this ridiculous little Bacon biscuit. Now, I’ve always been a fan of strong genre films, specifically sci-fi and horror, and this delivered on all counts. Enjoyable leads, agreeably underwritten romance, and resourceful action that somehow collaborated well with a premise that boils down to: monsters in the ground.

Tremorsisn’t a very smart movie, but it doesn’t want to be — it’s unpretentious. There’s very little mythos, and I love that about it. Even despite the inclusion of a timely geologist, which is pretty funny in hindsight, there’s zero emphasis on where these “graboids” come from and what their motive may be. Instead, every character reacts in a natural way and in a very Carpenter-esque style; the multitude of friendly characters all pitch in to move the story and aggressively keep the film oddly procedural. Plus, any film that gives Fred Ward a starring role gets a gold star in my book. He’s the true blue collar of Hollywood, and it’s a shame he’s since been relegated as “the angry American” in every film. Though, to be fair, he does that well.

Randall, I know you love a good horror film. What are your thoughts on the scares here?

Randall Colburn (RC):I do love a good horror film, and as a kid, Tremors was the kind that would send me scurrying under my bed. That’s kind of funny now, considering that, to an adult’s eyes, the film is almost undeniably a comedy. But I found every kill absolutely horrific as a child, my tiny mind dwelling over the logistics of getting sucked under: the teeth gnawing at your feet, the sand and dirt collapsing over your head, that whole “eaten alive” thing. And the station wagon slowly getting pulled under, that woman still inside? That shit is a claustrophobic nightmare. Maybe I spoke too soon. This shit is stillscary.

I agree, Mike, that the film isn’t horribly smart. Still, though, there’s a few key moments where the film takes itself just serious enough: the dread, for example, that accompanies the body stranded at the top of that power line or Melvin’s anguished cry when he sees Nestor get sucked through the tire. The latter still gives me that emotional tug, and it helps cement just how tight-knit their community in Perfection is. I love a good ensemble, and Tremors builds a lively one: the stalwart Miguel, the bloodthirsty Gummers, general store owner Walter Chang (Victor Wong), so desperate to give the monsters a name.A good ensemble, believe it or not, is just as important to a horror movie as its killer, because for one to persevere you have to care for the people getting killed.

I think every death in Tremors carries a certain weight. What ones stick out to you guys?

BG: Randall, I gotta admit that I never thought of this in horror flick or kill film terms. I thought it was a creepy, crawly comedy with a Western vibe, you know? Like, the violence read as silly to me, but maybe that’s the mass appeal of this cult hit – the way it crisscrosses genres, this movie’s got a little bit of everything. It’s got some great set pieces with perfectly odd punchlines (“Can you fly, sucker?!”) and some nifty scares around every corner. Oh wow, I was about to call this a roller coaster but that’s pretty apt!

You guys are right; it’s not the work of geniuses. But Tremors certainly is clever, taking the monster movie out into broad daylight, with the monsters hidden in plain sight. And the people dealing with these monsters are a colorful cast of characters, with amusing personalities, and you don’t necessarily want to see Val and Earl get grabbed. They’re just two decent dudes stuck in a weird situation. It’s impressive how Ron Underwood just nails tone uniquely here.

Still, I will admit, to watch poor shop owner Walter Chang get taken while trying to shut up his loud ice box when it starts to whir. Yeah, the little bit of blood that comes out of his nose still upsets me.

Thanks for bringing that back to mind, you two.

MR: It’s pretty hard to top the station wagon sequence. I love the way Underwood cuts at just the right time and lets us watch the headlights beam up into the night, only to disappear. Very haunting, but also stylish. Blake, you’re right that this is a modern Western of sorts, but the strongest exports of that genre usually have something to say, and I’d like to imagine there’s a metaphor about xenophobia here somewhere. The fear that “our land” could be swept from under our feet by this unmistakable force — it’s a little on-the-nose, but that’s the point, right? Especially when you consider Burt’s histrionic role as the gun-toting American surviving by his constitutional rights to own a small army of weaponry. Am I reaching?

RC: Maybe a little, but isn’t that hunt for metaphor part of what makes genre films so fun? I rather like your interpretation, as it feels as throw-backy as the film itself. There’s something kinda quaint about Tremors, a quality that I think hearkens back to the lack of pretension you mentioned, Mike. Fetishizing the 90s is dangerous, but they were undoubtedly a simpler time, at least from a cinematic perspective. 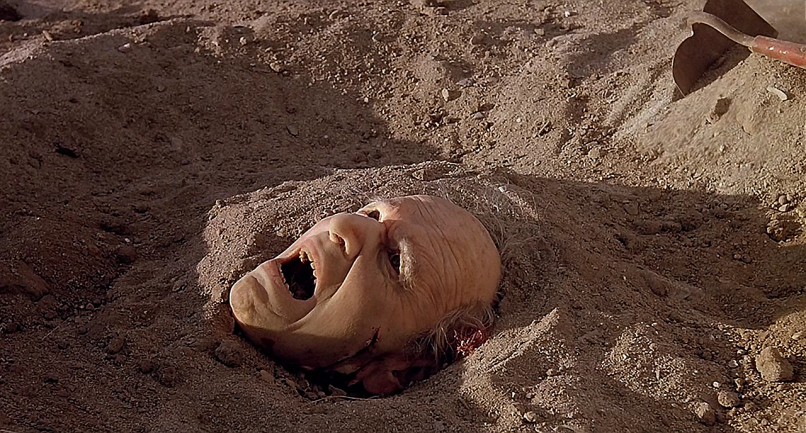 In many ways, Tremors feels of a piece with Joe Dante’s greatest work, where creativity eclipsed brashness and no creature was so horrific that there wasn’t a joke to be cracked at its expense. It’s such a fine line, this balance of comedy and horror, and one that Tremors’ numerous sequels could never quite tow. Still, they definitely have a following: when I poked at Tremors 2: Aftershocks in this CoS feature on unnecessary sequels, I was met with some serious blowback.

Have you guys seen the sequels? Why do you think the series has persevered as it has?

BG: Admittedly, I’ve steered clear of the sequels. It always felt like a cash grab on the popularity of the cable broadcasts. Plus, what’s the point when the straight-to-video (which often means poor) sequels couldn’t get any original cast of production members? But what do I know? A seventh sequel is due out this year with Michael C. Gross and Jon Heder of all people. Somebody’s still watching and demanding these!

MR: Aftershocks isn’t awful. Fred Ward and Michael Gross return, the premise is agreeable, and the effects aren’t too shabby for a DTV sequel. Veteran actress Helen Shaver also plays a romantic interest of Ward’s, offering a tangential, non-intrusive backstory that feels quaint for the hammy B-movie. Some of the magic’s gone — it’s less of a survival tale and more of a balls-to-the-wall action flick — but if graboids are what you want, that’s probably the most serviceable sequel you’ll get.

From there, it’s a woozy downward spiral with an abysmal third film (ahem, “Ass-Blasters”), a forgettable fourth, and a mismanaged 13-episode series that ran in 2003 on the Sci-Fi Channel. As expected, Gross returned for each installment, though a commendable mix of B-listers joined him for the show: Dean Morris (Breaking Bad), Marcia Strassman (Honey, I Shrunk the Kids), and the one and only Christopher Lloyd (Back to the Future). Sadly, the franchise would be a goldmine today for ol’ Doc Brown, whose most recent gig was Animal Planet‘s brutally embarrassing Blood Lake 2.

But really, Tremors isn’t exactly A-list territory, either. Hell, why do you think we’re celebrating its 30th anniversary in January? It’s one Kevin Bacon away from its successors and executed mostly by Underwood’s conscious understanding of the Western and horror genres. It’s a fluke picture, an assembly of quirks and oddities that just so happened to line up. There’s something beautiful about that, and sometimes it’s that curious arrangement that proves timeless.

Singer Joy Villa Shows up at the Grammy Awards in a ‘Trump 2020’ Dress: ‘Impeached and Re-Elected’

‘National Treasure 3’ Is Reportedly In The Works, Thanks To Disney