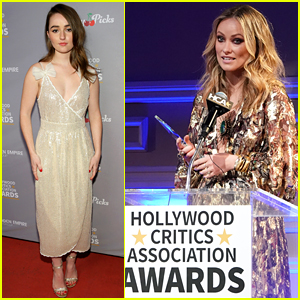 Olivia Wilde accepts one of her several awards at the 2020 Hollywood Critics’ Association Awards on Thursday night (January 9) at Taglyan Complex in Los Angeles.

Booksmart was a big winner at the event with Olivia taking home Best Female Director, the movie tying for Best Comedy/Musical and Kaitlyn Dever winning Best Performance by an Actress 23 and Under. Olivia was also honored with the Trailblazer Award!

The “Next Generation of Hollywood” was honored at the event and some of the recipients who attended included Kaitlyn, Kelvin Harrison Jr., Geraldine Viswanathan, Brooklynn Prince, Millicent Simmonds, Mckenna Grace, Jack Dylan Grazer, and Thomasin McKenzie.

Best Performance by an Actor 23 and Under – Noah Jupe, “Honey Boy”

Best Performance by an Actress 23 and Under – Kaitlyn Dever, “Booksmart”

Star on the Rise – Taylor Russell

End of a Decade Awards Recipients

Actor of the Decade – Adam Driver

Actress of the Decade – Kristen Stewart

Director of the Decade – Denis Villeneuve

SPACE CAMP Remake to Blast Off for Disney+

Bill Murray Recalls How John Prine's Music Helped Him Out Of Depression https://celebritycontent.com/2020/04/02/bill-murray-recalls-how-john-prines-music-helped-him-out-of-depression-whiskey-riff/

A ‘Back to the Future’ filming locations guide https://celebritycontent.com/2020/04/02/a-back-to-the-future-filming-locations-guide-curbed-la/